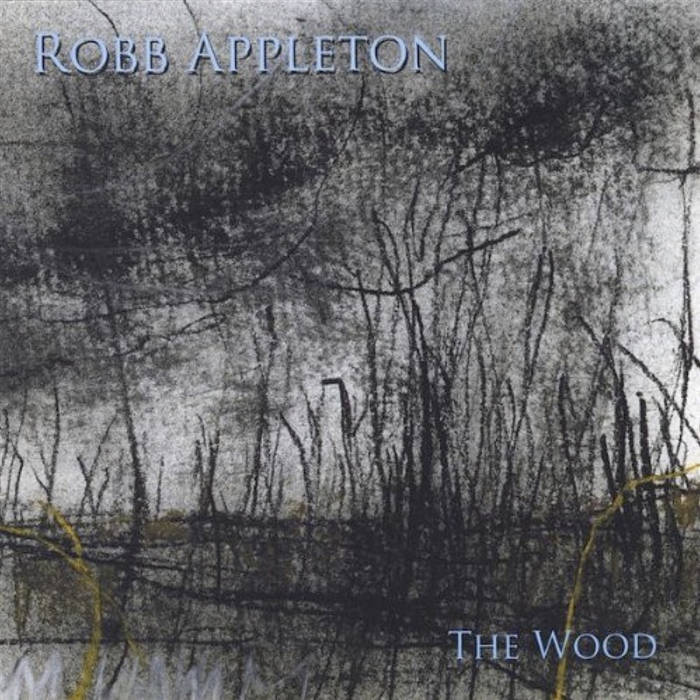 A unique and atmospheric album of melodic soundscapes and songs using acoustic instruments, electronic programming, vocals and natural/manipulated sounds, organic meets electronic - taking the listener on an emotional, deep, journey through the wood.
Robb Appleton is a harmonica player, and his diatonic harps are a prominent voice on this album, but The Wood doesn’t sound like a harmonica album. In fact, it sounds more like an album made by someone who decided to get a harp player in because they wanted that sound. Instrumentalists have to play to their strengths when they record an album as leader, but rarely do they assemble a production to which their voice sounds such a natural and integrated complement.

Nor has Appleton created a setting that is in any way obvious. There is a little guitar on one track, and the occasional element that resembles a found sound or field recording, but for the most part everything other than the harmonica and vocals is electronic. Not in-your-face, warped, trancey synth array electronic, but subtly utilised pad, synth bass and programmed beats type electronic. Only occasionally are the sounds treated in a way that obscures their synthetic sources, but the whole sounds entirely organic nevertheless.

This is an album of atmospheres. I would hesitate to describe it as an album of exclusively ambient music, because there are some very emphatic and kinetic beats, but the pieces they are found in, and indeed the few vocal songs, still seem primarily directed at creating moods. The title of the album encouraged me to hear the pieces as though each were the aural equivalent of a different woodland scene. There are echoes of soundtrack work in this, and it is easy to conjure mental images while listening.

The textures rarely repeat the clichés of melody plus accompaniment, Appleton preferring to adopt a more ‘all-over’ approach: this is not to say that every track is awash with soft pads, however. Sometimes the harmonica is contrasted with drones, or percussive elements, and sometimes it is processed itself, so that its sound becomes more textural, and less focussed on its pitch. Songs with a clear groove, such as ‘Let Us Finish It’, tend not to interpose much, if any, harmonic padding between bass and melody, making for a very sparse effect. The beats are written with control and discipline, creating a bare and open scaffold from which the other elements swing like pendulums.

There is an otherworldly, somewhat disturbing sense to the ambiences collected on The Wood. Whether it is the menace of a bassline that ends its phrases away from the tonic, or the processing of a human voice into dis-coherent whispering, like an unnaturally sapient rustling of the leaves on the forest floor, or indeed the pronounced tension in both the lyrics and vocal delivery of ‘The Known Stranger’, it is clear that Appleton’s sylvan spaces are not necessarily comfortable locations to inhabit.

Appleton does not foreground his harmonica in the sense of soloing, but he does develop its sound into a wide array of textures, both electronically and physically elicited. Rhythmic, train-like blowing is used to establish a rough, continuous surface in ‘Corrugation’, rather than the shuffling groove that technique is more usually applied to. He is similarly creative in his use of synthetic elements, using them in a conventionally tonal manner when appropriate, but twisting and manipulating their timbres when it suits his purposes.

The Wood is informed by an enquiring musical mind, one that is not satisfied with the easy answers to questions of artistic purpose. Its dynamic is calm, inviting a particular sort of response, one encouraged by the pastoralism promised in its title; but it delivers an experience which challenges the listener to engage a little more actively with the question of what they are listening to, and why. It certainly has a pronounced beauty to it, but it is not ‘pretty’; it has a dark aesthetic, which rewards listening more the deeper and closer it is. (Oliver Arditi)

Robb originally hails from Southend-on- Sea, then to Cambridge.

Bandcamp Daily  your guide to the world of Bandcamp

Serena Cherry debuts her black metal project, plus a Pick from the Crypt block from Svalbard